I owned Heavy Tools HT Comp first in mid of 90s. It was one of my favorite mountain bikes ever. In the beginning of 2017 I got nice chance to have one again. I decided to buy a frame and expand my “retro” collection with a new bike. In addition to that I finally wanted to carry out one personal dream that came true – a bike in silver/pink color. Please, welcome Heavy Tools HT Comp. 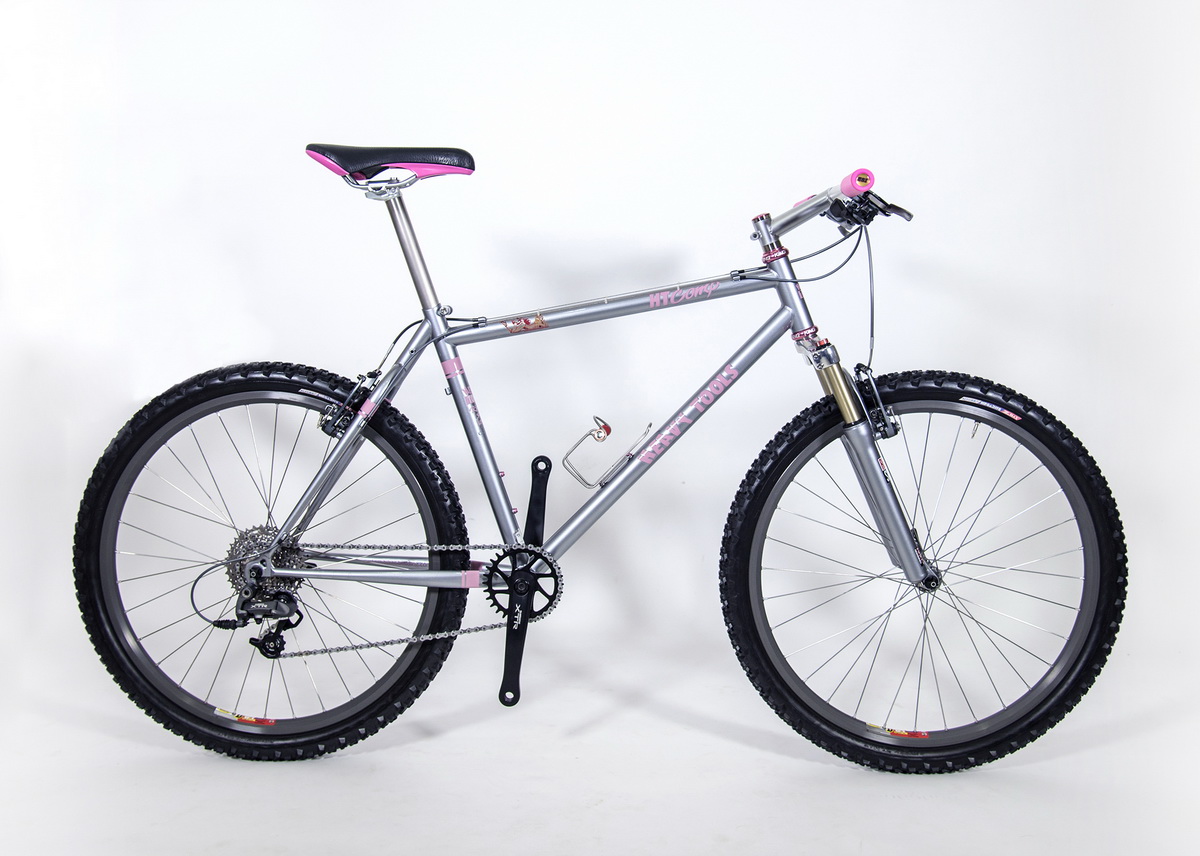 I built this bike on solid steel frame made from Tange tubes by Heavy Tools in 1992. Overall condition of the frame was good; however I made some restorations before re-spraying it. I did not ever think about “periodic-correct” build, thus I have had a free hand. I removed the rear brake cable hanger from the frame, while front derailleur cable stops remain in place (what if in the future). All Heavy Tools decals have original size and shapes, but custom colors. The only exception is one at the seat tube. This one is my custom-original and expresses my warm relationship to the bike:”Ride it with Love”.

I rode this bike with suspension forks, but not the Rock Shox Judy XC. The Rock Shox forks came from my younger bike used late in 90s. I did re-spray it in silver to match the Heavy Tools frame and I did complete fork service. As I wrote in another place of my blog, I have changed all bolts to titanium, as well as I swapped the steerer, so now the forks are SL edition. All in all, it`s still one of the best cross-country forks made in 90s ever.

1x9 drivetrain is the most interesting part of the whole rebuild, thought. It is based on Shimano XTR M952 components, which made me so complicated to accomplish it. Shimano XTR FC-M952 cranks were never ever made as spiderless-capable. I found Garbaruk (UKR), who’s solved my problem. They made custom direct mount chainring for these cranks. Apropos – cranks. I did good job on them. I removed old paint and brushed legs well, then I let them anodizing in black. “XTR” logo has been lasered after. In addition to that I cleaned and replaced three small cogs in 9-speed XTR cassette and I made full service of a bottom bracket.

Shimano XTR M952 group has been completed with a rear derailleur, a set of brake/shift combo with the left-hand brake lever only, a set of front and rear brakes and original XTR grey brake/shift cables. Both brakes got new brake pads.

Next pit stop - wheels. I built them on Shimano XTR hubs. Front hub was in a great condition with no service required. I replaced a cone in the rear hub. I wanted to build the wheels with Mavic XM317 rims, but then I found on “evil-bay” a pair of new, never used Mavic D521 rims that fitted my expectations better. Do you remember, late in 90s were offered for new-coming discipline of Enduro and light downhill. Finally I laced the wheels with DT Swiss spokes and nipples. On top of that I run legendary Ritchey Z-Max tires in 2.1” version.

Pink is fully supported by ESI grips and bar plugs, and all scuff guard bits at the Fizik Nisene saddle. Well, these guards were originally red, but I did manage to get them pink. Pink water bottle cage bolts is a must. It`s pity, but I haven`t found yet seat post binder bolt in pink. I used silver ControlTech instead.

Chris King NoThreadSet headset is the icing on the bike. That was my very first and the most important piece of the build in pink anodization, because CK announced discontinuation of all parts production in pink.

Not to be pushy so much, I chose classic silver handlebars KORE, silver (at least for me) unknown stem and titanium seatpost PMP. Headset spacers are titanium, too. Almost all screws on the bike are originals. Screws in stem and seatpost binder are titanium.

I like this bike, although the painting is not perfect and you may find some small issues here and there. I`m satisfied…more than that, I`m happy. One dream came true.